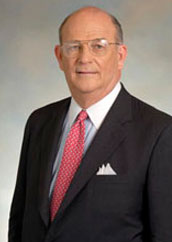 Michael Abromaitis ’58 was named the 2016 Rev. Joseph M. Kelley, S.J., Medal recipient. Regarded as the highest form of recognition given to a Loyola alumnus, The Kelley Medal recognizes an alumnus who is outstanding by reason of distinction gained in business, profession, or by his participation in ecclesiastical or civic affairs.

Working in law for more than 40 years, Mike Abromaitis is currently an attorney with Wright, Constable & Skeen, LLP, where he specializes in corporate/business law, nonprofits, estates, and trusts. He graduated from Loyola University in 1962 and the University of Maryland Law School in 1967. Additionally, he completed his Master of Laws at Georgetown University in 1971 and an MLA at Johns Hopkins in 1990. During his time at Loyola, he was a member of the football team.

He has served on numerous boards of local nonprofits, including Loyola Blakefield, Baltimore Opera Company, Walters Art Gallery, and Notre Dame Preparatory School. He also served as an Infantry Company Commander in the U.S. Army and was Airborne and Ranger qualified. He is the proud recipient of the Korean Defense Service Medal. Mike has received the papal honor of “Knight of the Equestrian Order of the Knights of the Holy Sepulcher in Jerusalem.” He was also accepted into membership of Legatus, a referral and education group which recognizes Catholic business leaders throughout the country.

Named in honor of Rev. Joseph M. Kelley, S.J., the Kelley Medal recognizes his dedication and commitment to educating Loyola students in physics and mathematics for nearly 40 years. As such, the Kelley Medal is regarded as the highest form of recognition given to a Loyola alumnus. It recognizes an alumnus who is outstanding by reason of distinction gained in business, profession, or by his outstanding participation in ecclesiastical or civic affairs. In addition, the alumnus is recognized for how his personal, family, and public life serves as a role model and example to the students and graduates of Loyola Blakefield. The medal was first presented in 1962 to the late Edward J. Donnelly ’33, the first lay member of the Loyola Blakefield Board of Trustees.