Estate Planning Quick Reads – Will A Revocable Trust Do For You What You Think? – November 20, 2018

Estate Planning Quick Reads – Will A Revocable Trust Do For You What You Think? – November 20, 2018 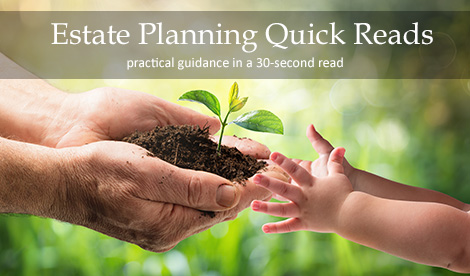 I received a call very recently from a client who said to me “I have to have a revocable trust done without delay.” My response was “Why?”

Firstly, I made him understand that maintaining a revocable trust, might, in some circumstances, be cumbersome and that he would have to be very careful in making sure that he did not treat the property in the revocable trust simply as his own. He asked me why there would be probate if he had a revocable trust and I gave him a list of possibilities by way of questions. I asked him if he had medical insurance, and he responded “Of course.” I told him that if he did not die on the exact date to coincide with a premium period, it would be likely that a refund would be issued in his name. Since no one could endorse the check, it would be necessary that a replacement check be obtained in the name of his estate—and at least a small estate would have to be opened to process it. I asked him if he had license tags on his car, and, if so, what were the time periods for which they were issued. He responded that his tags are always issued for a two-year period. I explained to him that if he died within the first year of the issuance of those tags, his “estate” would be entitled to request a refund of the second year’s fees upon the license tags being surrendered. Related to that, I asked him if he had insurance on his car. Again, he answered “Of course.” I determined that his car was leased and that the insurance on the car was in his name. I explained to him that upon the disposition of that car, assuming it did not occur on the date his insurance expired, there would be an insurance refund coming—to his estate. I asked him if he owned his home or lived in an apartment. He indicated that he had sold his home and was living in an apartment. I asked him whose name the lease was in. He told me it was in his name. I asked him if he had paid a security deposit when he leased the apartment. He told me he did. I explained to him that upon the expiration of that lease, assuming the lease could be cancelled without a penalty eating it up, his estate would be entitled to a refund of a security deposit. These are all examples of minor things resulting in payments due, not to the revocable trust, but to the individual and that all of these would have to be processed through his estate. I then discussed with him the possibility that a probate proceeding might be advisable in order to cut off creditors’ rights as well as numerous other obligations which can be finalized through the utilization of the probate process.

While it is true that the bulk of his assets would transfer through the revocable trust, there is no guarantee that no probate will ever be required. There are numerous other misconceptions that people have resulting in their thinking that a revocable trust is there answer to everything. We will address these in other upcoming articles.

In the interim, if you have a burning question, we will be happy to discuss it with you.