After Frances and Robert decide that couples counseling is no longer an effort worth pursuing, we observe the parties approach the divorce process head-on.  While the couple had previously discussed the idea of contacting attorneys or doing research online, Frances and Robert decide to meet with a mediator.  Wearing her neutral, independent hat, the mediator is not the least bit interested in hearing the dirty laundry of the parties.  Instead, the mediator hands out starter kits and assigns Frances and Robert homework, which, not surprisingly, includes instructions to tell the kids that they are getting divorced.  Before Frances and Robert even make it to the second mediation session, outside influences get in the way and undermine the process.  We watch Robert chatting with a business colleague, who literally laughs off the idea of mediation and recommends that Robert meet with a lawyer.  In the end, Robert stands up Frances and the mediator at the second appointment and the episode ends with Robert sitting in an attorney’s office.

While I applaud Frances and Robert’s efforts to approach the divorce process in a civil manner, I had my doubts that mediation would work for two important reasons.  First, if mediation was successful, the show wouldn’t be very interesting (not to mention it would make for a very short season).  Second, with the complexity of issues at play for Frances and Robert, I felt that they would each benefit from the advice of independent legal counsel.  Put simply, the role of a mediator is to help parties reach agreements and find solutions.  A mediator cannot provide legal advice or recommend terms of an agreement.  Those tasks fall squarely upon the shoulders of an attorney.  Here, Frances and Robert each need to hear and understand from their own attorney the impact Frances’s adultery makes on the issues of alimony and monetary award; how Robert’s business would be valued; and whether either party has a viable claim for alimony.  Absent this advice, there is a great level of uncertainty and anxiety as to whether each party is getting a fair deal.

The idea of “lawyering up” seems inherently adversarial, but the truth is that having your own attorney does not foreclose the opportunity for mediation (or any resolution, for that matter).  Quite the opposite, mediation can often times be more productive if the parties have separate counsel to offer independent legal advice as to the range of a reasonable settlement.  I am a huge proponent of mediation.  This form of alternative dispute resolution allows parties the opportunity to: (1) play an active role in the outcome of their own dispute; (2) develop creative, customized solutions; and (3) preserve a level of civility that is particularly important in cases when parties must continue to co-parent.  A party is much more likely to be willing to compromise in an effort to reach an agreement when he or she understands and appreciates the likely outcome of litigation and the associated costs.

In the end, without the advice of an attorney, Robert got cold feet during the mediation process.  While mediation did not yield Frances and Robert a comprehensive marital settlement agreement, it did result in Frances and Robert finally sitting the kids down.  And were you as surprised as I was to watch Robert so skillfully relay the message of divorce to Tom and Lila?  Well done, Robert! 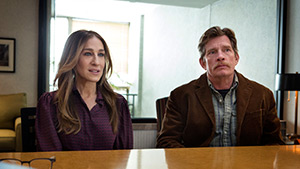