As a family attorney, when I meet with a client for an initial consultation, one of my standard questions is whether he or she is in counseling, individually, couples, and/or family. In the event that the answer is in the negative, I offer to make some referrals. Before anyone begins the formal steps to initiate the divorce process, it is worthwhile to consider whether, with the assistance of professional counseling, a marriage can be preserved. So, I was pleased to see the Dufresnes take this step.

I often meet with a spouse who is having conversations with his or her spouse about getting divorced, all the while still living together. Like the Dufresnes, one spouse moves out of the marital bedroom and sleeps elsewhere in the house. Sometimes, parents create access schedules with the kids, so even though they are living together, parents divide, in some fashion, the responsibilities to care for the kids. As a family attorney, my advice is this: You need to begin having frank conversations with your spouse about someone moving out of the home, even if only on a temporary basis. While Frances and Robert’s aggression toward each other may remain passive, all too often, one spouse gets to his or her breaking point and throws a mug/pan/snow globe at the other’s head. Now, marital discord quickly accelerates to one party seeking to obtain a protective order against the other. In the event that a Maryland court issues a final protective order, a judge can award a broad range of relief such as: (1) that the mug/pan/snow globe throwing spouse immediately vacate the home; (2) the establishment of temporary visitation with the minor children and the mug/pan/snow globe throwing parent; and (3) an award of emergency family maintenance. A hearing to obtain a final protective order generally takes a week and if successful, such an order may be effective for up to a year, and even longer under certain circumstances. You do not want to be subjected to a final protective order hearing, or be forced to negotiate under these circumstances, in a week’s time to address issues that will significantly impact your divorce case. Instead, spouses should try to proactively address the issue of separation before either one gets to his or her breaking point.

In the end, the breaking point for Frances was Robert’s reaction to her news about signing the lease to open up her gallery space on Main Street (which, frankly, we know that I agree with if you read my commentary to Episode 2). That being said, while I was sad to watch Frances and Robert say their goodbyes to each other, I was relieved to see that things between the Dufresnes did not escalate to the point of domestic violence. I am also hopeful that Robert leaving the house will force Robert and Frances to have an honest and age appropriate conversation with their kids about the status of their marriage. 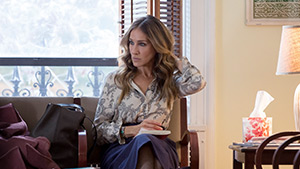