HBO promotes Divorce as its new comedy series.  When I first read that description, it didn’t make sense to me.  Are issues of separation and divorce really that funny?  But, in the process of writing these commentaries, I am watching each episode twice, and, I must admit, it is really funny!  Particularly Robert’s demeanor.  Out of his pain from Frances’s affair, his behavior is at times, well, hysterical!  Is there something to be said for that?  Well, maybe.  Maybe it’s a good reminder for all of us, even if in the midst of a family law dispute, to take a step back and find something to laugh about.

In Episode 2, I was particularly interested when we see Frances look at new space to open an art gallery.  She is contemplating leaving her job to pursue her dream of owning a gallery that showcases local artists.  While her gut was telling her that this was not a good time, her realtor was less than sympathetic (funny!).  As a divorce attorney, my instinct is the same as Frances’s – this is a bad idea, at least for now.  There is a great deal of financial uncertainty and stress during a divorce process.  Aside from the expense of lawyer fees, Frances may soon be facing some new living expenses, such as hiring movers and getting her own apartment.  She and Robert may also soon begin talking about how to divide household and family expenses differently than when they were together, such as the payment of the mortgage, car insurance, expenses for the kids, etc.  Now may not be the best time for Frances to leave her secure job, which presumably offers retirement benefits and health insurance coverage, which I would anticipate covers the whole family.  If Frances leaves her job to open the gallery, not only will she lose steady income and significant benefits, but she will be taking on liabilities, such as rent and insurance for that new gallery right on Main Street.

The art gallery also raises the issue of marital property.  If Frances pursues this new business venture, it is possible that the gallery will become profitable.  Given that the business may be formed and grow in value during the course of the DuFresne’s marriage, it will likely be considered marital property.  That should give Frances some pause.  In the course of a divorce proceeding, a Maryland court is often asked by parties to grant a monetary award.  In awarding a monetary award, Maryland courts are required to undertake a three-step process: (1) characterize all property owned by the parties, however titled, as either marital or non-marital; (2) determine the value of all marital property; and (3) make a monetary award to yield an equitable distribution of marital property.  In sum, Robert will have a marital property interest in Frances’s art gallery, the value of which will be considered when a court considers whether to order a monetary award.
At the end of the day, I agree with Frances’s gut reaction to hold off pursuing her dream of opening an art gallery right now.  In addition to following her gut, Frances should follow the advice of an experienced family law attorney (like me and Fred) to help navigate these kinds of decisions during this period when she and Robert are contemplating a separation and divorce. 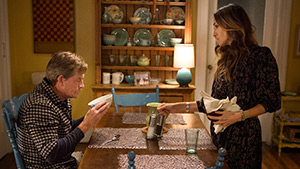